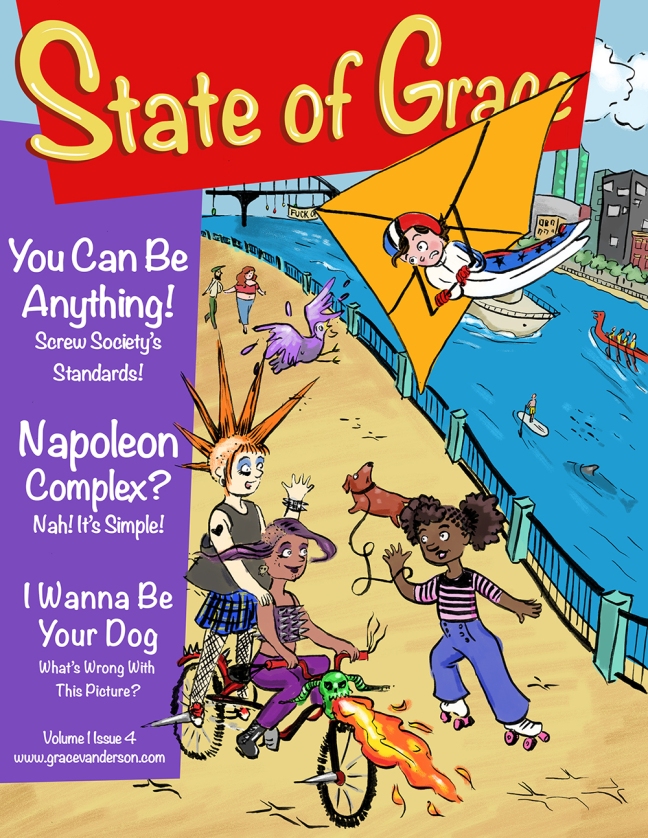 You Can Be Anything! Screw Society’s Standards!  Cover.

I Wanna Be Your Dog – What’s Wrong With This Picture? A scene with the New York Dogs.

I recently had the pleasure of working on a personal commission that brought together my love of classical art, and my enjoyment of silly juxtaposition. A modern take on the ultimate Dude-Bro, Napoleon.

What’s Wrong With This Picture?

Give me your guesses in the comments.

Last weekend I got the extreme pleasure of observing the fruits of my labor in action and watching badass ladies do even more badass things. Earlier this year I helped the genius behind SoulCraft Moto, Kandy Longstreet (pictured above) create some cool stuff (like hand lettered and illustrated posters and t-shirt designs) to advertise her ladies only dirt bike campout in Washougal. When she invited me to join the campout armed with my box of sharpies, I knew I couldn’t resist.

This was my third visit to Washougal, but this is the first time I felt a real palpable energy buzzing through the trees. As soon as I pulled off the road, I was surrounded by the sound of 2 strokes and 4 strokes whipping through the hillside, all around were about a hundred women in armor and helmets, looking like the coolest tribe from Mad Max.

Being around all these cool chicks on bikes made me giddy. I got myself set up in the mercifully shaded tent to draw on stuff (they were even more badass for being in the 90 degree weather in full armor). Seeing all kinds of stuff with the hand lettering I created stamped on it got me even more pumped- usually you send off your work for a job and maybe see it floating around in pictures on the web, this time I was surrounded by shirts and stickers and hoodies with my work on it-super surreal. The only thing that would have made it better was not having 2 broken toes, but I will ride next year!

Have I mentioned that Essence of Dirt took place on International Women’s Ride Day? So not only was I surrounded by over a hundred fearless women from all over the Pacific Northwest (even Canada!), but women all over the world were meeting to make some noise.

The hours flew by as I got to draw on weird stuff and hang out with the stellar women who made the whole event run so smoothly. I left Washougal that evening with my ears buzzing and a grin on my face- and I only got a small taste of the full campout. Next year I’m renting a bike.

Last year saw the opening of Portland’s first pedestrian/mass transit only bridge, which has been dubbed “Tillikum Crossing: Bridge of the People”. I would like to argue that title however for the Sellwood bridge, which is currently a masterpiece of neighborly self governance. Having been in a state of constant construction for the past few years, and currently boasting no stoplight on the eastern entrance, it’s a bit of an obstacle course.

When I moved to Sellwood 2 months ago I ran into a morality crisis I had not had to navigate in the Alphabet District (where the moral crisis is whether or not to leave a note when you inevitably bump into 5,000 Subaru’s while trying to parallel park). I found that my commute could be cut down by an impressive 20 minutes, if I chose not to take the main street leading to the Sellwood Bridge in order to get to my job in the burbs. It felt wrong at first, to leave everyone else stranded on Tacoma while I whizzed down Miller (and by whiz I mean carefully meander in and out of parked cars so both lanes of traffic can actually get through, while also not running over the sweet but speedy and erratic Catholic school children on 15th).

I’ve come to terms with this moral gray area by making a compromise- instead of being super greedy and taking the last street before the bridge, I enter the fray on 7th. I feel even better if I let someone in from the 6th intersection, and I feel like a goddamn superhero if I can let someone make a left turn onto the bridge from 6th. Remember that whole no stoplight thing? There aren’t even stop signs at 6th, so drivers who take the side streets really are at the mercy of all the patient/road ragey souls who have waited their turn on Tacoma. 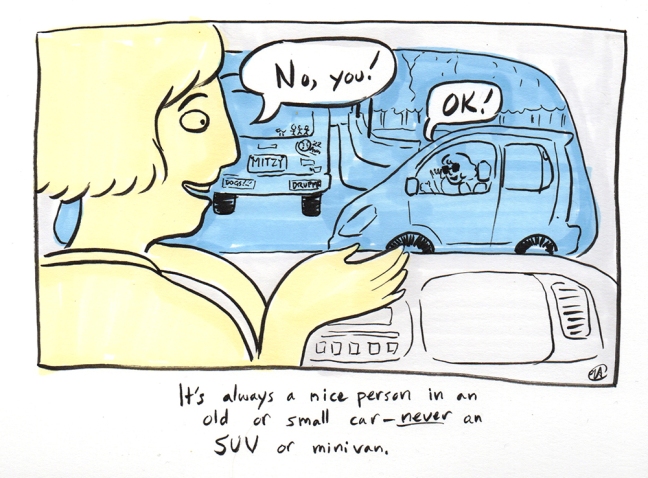 I would like to take a moment now to apologize to everyone I commute with- I’m sure I just sold out our shortcut, fellow shortcut takers, and I’m sorry the folks on Tacoma haven’t figured this out already- but they’re probably from Milwaukie anyway, so whatever (I’m looking at you, Enoch).

International Table Top Game Day came and went a couple of weeks ago, and I was lucky enough to score a table for One-Liner! at our local game emporium, Guardian Games. Up til now, the game has only existed as my original drawings and digital copies that I sell here– for ITTGD I made the first printed copies ever. Not gonna lie, I might have teared up a little bit when I got handed the stacks of card stock with everything looking all profesh and shiny. This was after an entire week struggling with my outdated home printer and a head cold. The visit to a real printer was totally worth it. 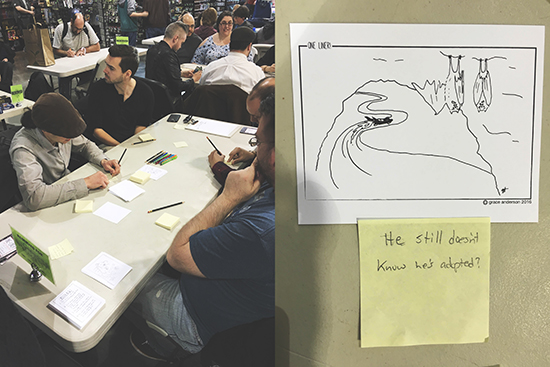 Guardian was packed to the gills with enthusiasts and game designers- it was great seeing so many people enjoying themselves and discovering new games! My favorite part was seeing what people came up with for the latest expansion, Nerds! I honestly don’t have captions in mind when I draw the cards, I still want it to be fun for me to play, so it’s fantastic when someone writes something totally unexpected and hilarious. 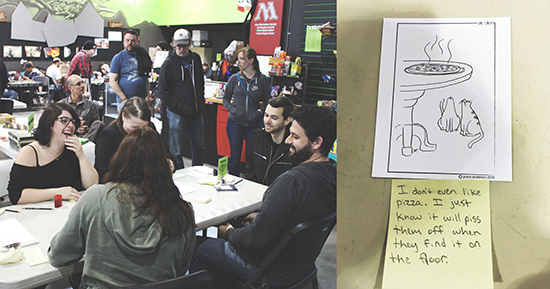 IITGD was a great time, I loved seeing reactions to the game- its nice to have confirmation outside of my living room that people have fun with it! Since the outing at Guardian Games went so well, I decided to take it out for another test run (with my boyfriend and co-creator) at the weekly game night at My Father’s Place, which literally looks like someone’s dad’s basement bar from the 70s.

This time I left the table entirely- not gonna lie, I freaked out a little bit at leaving the cards behind. Luckily they were in good hands with our friend, I will never doubt him in the future. I was happy to hear that the game continued to be enjoyed for a few rounds, before a drunk lady crashed the party, as they do.

It’s pretty scary bringing this game out in public and hoping people will like it- it feels a little bit like the first day of school, or going on stage for a talent show. So far so good, thanks for being nice to me Portland!

Letter from the editor:

This issue is devoted to my lady heroes, Audrey Hepburn and Tina Fey (plus some other Tina’s). I had planned one more article for this issue, with one more super awesome lady, but I over scheduled myself this week with promoting my game, One-Liner! at International Table Top Game Day, hosted by Guardian Games and having 2 broken toes. Please accept my apologies and take the next 2 weeks to ponder the true message of Billy Idol’s Rebel Yell, which I will reveal in the next issue of State of Grace (message from the future, this never happened). In the meantime, please enjoy the Tina Scale personality quiz! 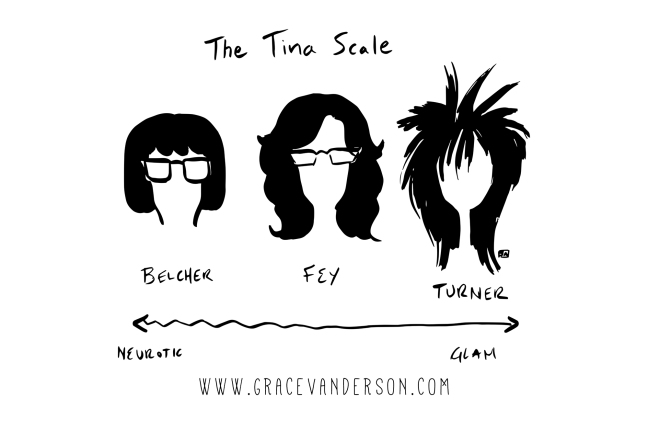 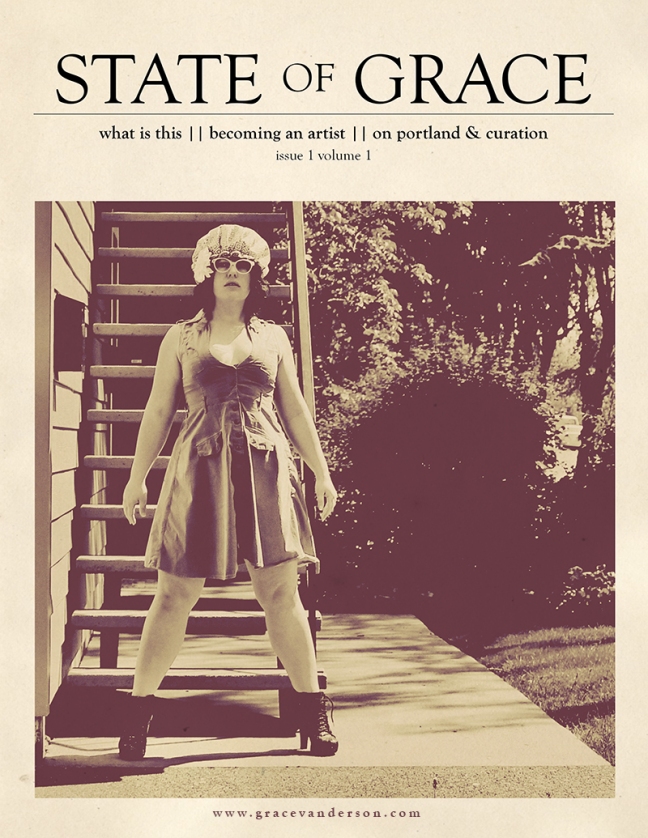 State of Grace is a mini-mag published biweekly(bimonthly, bi-yearly?), right here, for you, by me (Grace). My friend came up with the title in a fit of cleverness, and was banned to the pun porch for a few minutes before I realized it was great. The goal of State of Grace is to make you laugh, or chortle, or at go ‘huhm.. that’s.. funny.’, which I accept as an in person response and interpret as great praise. Each issue will be modeled on a different print publication- see if you can guess!

People come to creative professions in many ways. What I find to be a super common and effective route is to be the kid the teachers are a little concerned about (but generally like); there is a fine line between being the artsy kid, and the scary kid. During your time as a budding artiste, your parents should get a lot of phone calls about ghosts in the bathroom, strange notions about something called a ‘leather bar’ in your latest storybook, and general looks of concern when all of your school projects could have been made by Wednesday Addams.

(How To Live Your Truth & Look Great Doing It, Especially In Portland, Please don’t take this advice.)

Over the years, I’ve lived in almost every major city on the West Coast. I partied in LA while being dangerously broke (the LA dream), I lived in a tiny studio apartment that left me dangerously broke in Silicon Valley (the second Silicon Valley dream, behind being rich). Now I’m working on living the Portland Dream- which from what I’ve read and observed means being painstakingly unique by means of ‘curation’. Just like every other good Californian who is absolutely ruining this area, I would like to share with you how you too can achieve this dream! I’ve included a handy photo guide, which you can add to your vision board while you work on living your truth.

I could go on and on about how this was a well thought out critique on our social media culture, and the dangers of how we present ourselves on the internet, versus real life… But I would be lying. I just started doodling, and this happened. 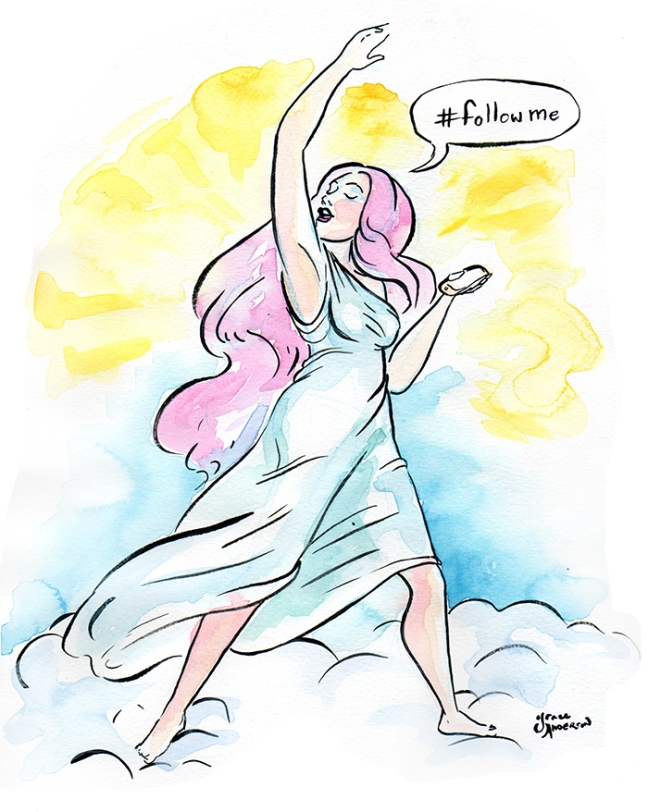